There are few diseases more devastating than the disease of alcoholism.  Forty-eight percent of people 12 and over drink alcohol in the United States but not all of them are alcoholics; only 18 million (8.5%) meet the medical criteria.  Of those 18 million who meet the criteria for being a real alcoholic it is estimated that each one affects at least 6 other people.

The disease of alcoholism takes root in the alcoholic but its tentacles reach out to all those that have a relationship with the alcoholic thus infecting all he/she touches.  Those that love the alcoholic react to everything the alcoholic does thus proving Sir Issac Newton’s theory that “every action has an opposite and equal reaction.”

The crazy thing about alcoholism is that it can make the person who is not the alcoholic in the relationship act crazier than the alcoholic.  Alcoholism can turn a sweet, lovely lady into a crazed lunatic without even taking a drink.  The disease of alcoholism can transform beauties into beasts, social butterflies into shy creatures caught in the depths of despair and church-going people into liars – all without one sip of alcohol.  What is worse is that the person affected often doesn’t realize how much power alcohol has over their life because they are not “the drinker.”

There is very little sympathy felt for the alcoholic because he does not have a “respectable” disease.  Telling an alcoholic to “just quit drinking” is the same as telling a cancer patient to “just quit having cancer.”  It is impossible for either to cure his own disease.  Every bit as much as the cancer patient wishes he didn’t have cancer; so the alcoholic wishes he didn’t have alcoholism.  Both would cure themselves if they could.

Since there is so little sympathy for the alcoholic, the person affected by this disease gets all sorts of advice by well-wishers.  “Why don’t you just leave him.  Why do you take that?  If I were you….”  and so it goes.  While most well-wishers have genuine concern, they are often ill equipped to understand a disease that consumes every waking moment for a person who lives with alcoholism. The advice becomes more critical and the disease moves underground; never speaking of it in public again.  Often the family begins to try to “cure” the alcoholic by offering up the same advice that the well wishers gave only with different words.  “You would quit if you loved me.  Don’t you care about your family?  You’re going to lose your job.  Why can’t you just quit…..”  and so it goes. 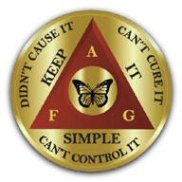 *I’ve used the term alcoholism, but any addiction can be substituted.

One thought on “Programs of Hope for a Deadly Disease”