I have a beautiful big red Doberman Pinscher who has been my constant companion for a little over 4 years.  Rory (which means Red King) is an European Doberman which means he’s a little bigger than an average Dobie.  Rory weighs in at 120 lbs.  His paw is so big that it takes up my entire hand, his chest and neck are massive.  I can confidently say that Rory is a very strong dog

This is a picture of my red king.  He looks adorable doesn’t he?

Doberman Pinschers have some very unique qualities.  Dobie’s have been given the term “velcro dogs” because they do not want to be left alone.  Dobie’s like to be with their owners all the time; no matter where they go.  Yes, they will follow you into the bathroom and cry when you lock them out.  It’s pitiful but true.  Doberman’s are fiercely loyal.  The will protect their owner with all that is in them.  Generally, a Doberman will not give an intruder a warning.  They are known for letting someone “in” but not “out.”  A unique physical characteristic that Dobie’s possess is their bite.  Unlike most other dogs, a doberman’s teeth scissor together.  If you were to interlock your fingers, you would get a good idea of what a Doberman’s bite looks like.  A Doberman biting trait is that they bite and release, bite and release; each time moving closer and closer to vital parts of your body (like your neck).

All that being said; most Doberman’s are extremely gentle animals.  They are loving beasts and they love attention.  As big as they are, they are just as content sitting in your lap (if you let them) as they are running in a field.  They are inquisitive, bright and an absolute joy.  Dobie’s have a way of getting under your skin and into your heart before you know it.

My Dobie is a unique character.  As a puppy, he was the dominant dog of the puppy pact and a “Doberman Rescue Specialist” says he never learned bite inhibition.  He also has an extremely high pain threshold.  When puppies play together, they learn to playfully bite each other so they learn that biting hurts and it shouldn’t be used often.  The Dobie Specialist theorizes that my dog didn’t get bit much because his bite was worse than the other dogs thus making the other dogs less apt to “teach him a lesson” by biting.  Who knows, maybe the other pups wouldn’t let him join in any reindeer games and he just got ticked off.  Either way, the combination of not much of a bite inhibition and a high pain threshold makes for one “bad ass dog.”

I know my sweet red canine friend would rather eat your hands off then have you touch me so I feel it is my responsibility to keep the public at large safe.  When I walk Rory in public, which isn’t often, he wears a muzzle.  When I take him to the vet’s office, I make sure it is the end of the day so that there aren’t as many animals or people in the office.  I am hyper vigilant at all times when people that Rory is not used to are around.  I have a dog who isn’t friendly.  I know it.  I love him just the same; but I do have to take responsibility for his actions. 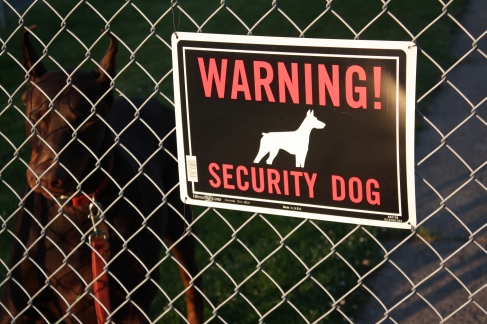 I have a fence that surrounds my entire house.  My dog is able to roam freely inside the fence.  There are three gates to the fence each posting a sign similar to the one above.  Each entrance to my house clearly states that the dog who lives in the house is not friendly.  Personally, I think the message can’t be any more clear. 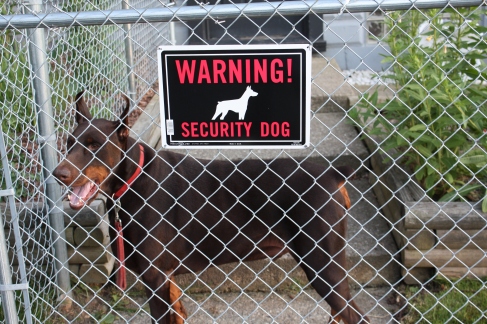 So, when you see a fence with a sign at each gate clearly stating that is isn’t wise to come inside……WHY DO YOU COME INSIDE?

Did I mention…Dobies are really fast?????