I am not always loving and I am not always kind.  There are times when I allow something or someone to enter into my sense of well being and rob me of my peace and serenity; it is at those times when the art of loving kindness eludes me.

Yesterday, I wrote a post entitled Listen to the Music of your Emotions which suggested that I can not get rid of a negative emotion until I know exactly the nature of that emotion and own it.  Since yesterday’s post, I have been able to name an emotion which I have been experiencing.  That emotion is hatred.  The word “hatred” makes me shutter and to attach that word to an emotion that I am experiencing makes me shutter even more; and to own that emotion is almost more than I can handle.   I think the reason I was having such difficulty naming my emotion as hatred is because it has been a terribly long time since I have actually “hated” and attaching hatred to me is something I had hoped that I would never have to experience again.

Why have I allowed this emotion, this hatred, to invade my peace?  I have allowed it because I have a preconceived idea of how certain people should act and behave in a given situation.  I guess, in my mind, certain people and organizations, by their mere oaths and doctrines should behave in a semi-predictable manner and when they fall miserably short they open, not only themselves, but a wide group of others by affiliation, to scrutiny.  Two such examples are respected religious organizations and physicians.

A catholic (affecting, concerning, or involving all, universal) organized religious institution who professes to preach love, kindness, compassion and Mercy has perverted those things which I hold dear.  When a religious organization truly acts with love and kindness, it will not take a person from a fragile place, give them high hopes and dreams, and turn those hopes and dreams into a nightmare.  A religious organization who acts with compassion and Mercy will not take that same shattered person and drive them further into the ground with life changing conditions.  A religious organization will not say they practice Mercy while dangling the very livelihoods of people in the balance.  Mercy is descriped in Webster’s dictionary as “compassionate or kindly forbearance shown toward an offender, an enemy, or other person in one’s power.”  Interestingly enough, Mercy is what is shown an “offender;”  how much more Mercy should be bestowed upon those who claim to hold us gingerly in their hands?

Physicians take an oath to “do no harm.”  I think most physicians take this oath seriously and work tirelessly to do the best in medical situations, but is that where “do no harm” should end?  Is it only “do no harm” in medicine?  It appears, for some physician, do no harm translates to “don’t do anything that may result in a malpractice lawsuit.”  What about doing no psychological harm to patients, employees or peers?  Are these situations exempt?  Is it wrong to expect a physician to treat other physicians, employees as well as patients with the respect and dignity that all human beings deserve?

I have to ask you can those two examples get much worse?  Well, yes it can.  It gets worse when a self-professed, God-fearing, Christian doctor who spreads dissention, hatred and discord via gossip and inuendo is employed and believed by a religious organization.

You might say that this post is nothing more than sour grapes.  You might be right; that might be a thought I will have to explore more in depth.  What I want this post to be about is getting in touch with my emotions and I can’t get in touch with them until I lay them on the table.

The hatred I feel is a direct result of my perception of how I think others should act. No one, not an organization or person, has the power to make me hate unless I allow it.  It is my expectations that have disappointed me, not the behavior of others.  I expected this religious organization and this doctor to act in specific ways and when they didn’t, I found fault in them.   Who am I to dictate the behavior of others?  When I expect things from others and they don’t deliver what I think should be delivered, I am doing nothing more than judging and that is God’s job not mine.

Hatred does nothing more than harm me.  My hatred of a person or institution has absolutely no effect on them; most often they don’t even know I’m hating on them, but it can cause me sleepless night, stomach discomfort, headaces, as well as a multiple of other physical problems.  I refuse to allow hatred to consume me so I have to find a way out.  I have to take action!

When I find an emotion, such as hatred, is totally consuming me, I have to spend more time in prayer and meditation asking my Higher Power to have me be what He wants me to be.  I have to pray for those who I hate even though I don’t feel they “deserve” it.  I have to ask God to bestow upon them all the blessing and fortune I would want for myself or those I love even if this in direct opposition to what I actually feel.  I have to pray for them until I actually believe my prayers.  Then and only then can I be what God would have me be.  It is easy to be loving and kind to those who are nice to me.  Only when I reach out and tap into a Power greater than myself can I begin to master the true art of loving kindness. 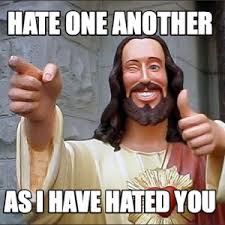 “Hate one another as I have hated you” has become the new “Love one another as I have loved you.”  Somewhere along the line, the doctrine of Christianity had become muddied with what is and is not biblical.  If memory serves me correctly, the Old Testament showed us what the letter of the law was and the New Testament shows us what the heart of the law is today.  The Messiah came to fulfill the law; a law that humans could never keep perfectly, but Jesus, being perfect, was able to perfect and fulfill the whole law for us.  He was beaten for that law, was crucified for that law, hung on a cross for that law, had nails driven into His hands and feet for that law so that we, as mere mortal humans, could be set free from the heavy burden of the law.  He took that law to the cross with him giving us the perfect heart of the law which is, in fact, Jesus Himself.

Why do I write these things?  I write them because I am saddened by the hatred that spews from the mouth of many who profess to be Christians.  A true Christian is a follower of Christ, I don’t remember Christ spitting hatred on those who were already in sin.  If I am not mistaken, he sat and ate dinner with those very people who are appalling to those who profess their Christianity.