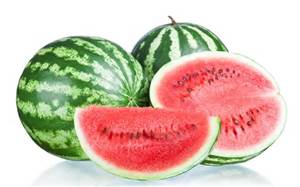 I woke up this morning and saw the watermelon on my kitchen counter.  Trevous gave it to me about 1 ½ weeks ago and I just couldn’t cut it; so it sat there, staring at me.  Its various colored light green covering just looking at me from its perch on my kitchen counter.  I wanted to cut it and taste the sweet red flesh from inside but I just couldn’t bring myself to do it.  Just like my father working in his garden, I wanted the watermelon to last forever but I knew on some conscious or unconscious level that keeping them forever was an unrealistic goal.

My father gave Trevous the plant that bore the watermelon.  When Trevous gave the watermelon to me my eyes filled with tears but I brushed them quickly away.  There I was, hiding my pain once again so that nobody would feel sorry for me, but they did feel sorry for me whether I cried or not.  My face has held the pain from my father’s death the moment he stopped breathing.

Trevous told me that the watermelon had been the only one that grew from the plant that my father had given him.  Now I don’t know if watermelon plants bare more than one fruit but it didn’t seem to matter; the watermelon was a link to my father and I didn’t even say “No, you go ahead and keep it, my father gave you the plant,” I took it greedily.

And so it sat on my counter, the watermelon; a fruit that nobody in our household held a passion for as my father and I did.  Much like a hunter waits for the first day of deer season to snag his first buck, my father and I hunted the produce stand for our first taste of a locally produced watermelon.  Of course, out of necessity, we’d critique it as to its color and sweetness.  We’d examine the edges, the rhine to see if it had caught a frost or become frozen during its growing or shipping stage.  Our expertise in watermelon scoring was unique at best.

This morning, my father’s voice rang loudly in my ear, “Are you going to cut the damn thing or are we going to look at it until it rots?”  Yep, I’d heard those words spoken many times when I didn’t cut the watermelon in a timely fashion.  I’d smile back at my dad and say, “okay, okay, I’ll cut it.”

Today, I cut it.  The watermelon spits its pink juice onto my shirt as I plunged the sharp steel blade into it and I silently cursed.  I sliced the watermelon in two and tears immediately swelled up into my eyes and rolled down my cheeks.  I missed my father so much in that moment as I looked at the red sweetness that had been hidden by its thick green rhine.  I removed the flesh from its covering and tasted it.  It was sweet but warm; nothing a refrigerator couldn’t fix.  When my father would reach into the container for his first piece of watermelon he would jokingly yell at me for ruining a perfectly good watermelon by removing its rhine.  “Watermelon is meant to be eaten with the rhine left on not removed like you do,” he would remind me. “Oh well, maybe next time I’ll keep it on,” I would tease him but he knew I wouldn’t.

My tears are wiped from my eyes now and the watermelon is safely tucked away in the refrigerator until it becomes cold.  As I eat it, I suspect I’ll remember my father lovingly with each and every piece.  Thank you Trevous for giving me such a tangible memory.